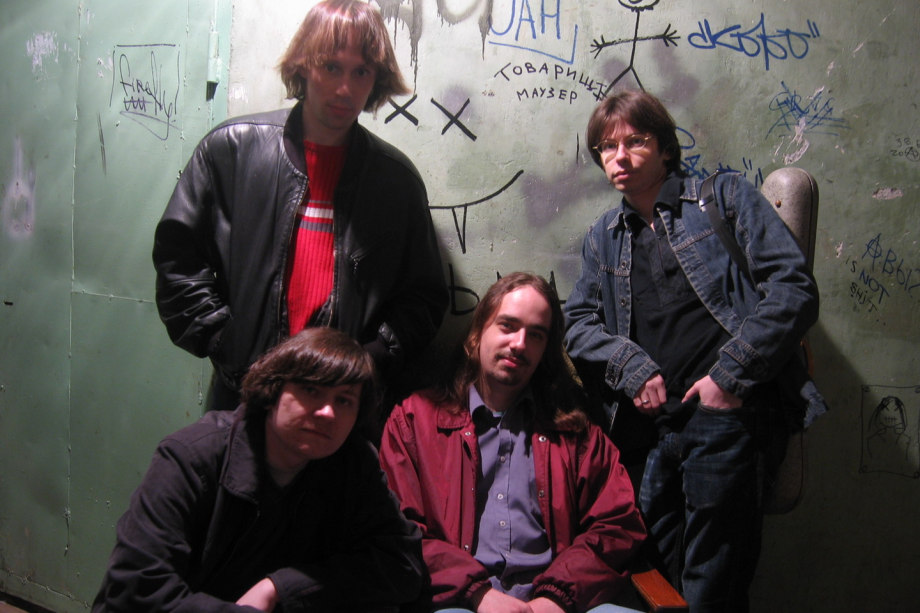 2004 – 2006 – Appearance at the InProg 2005 and InProg 2006 festivals in Moscow. Recording of the Awakening of the Elements (Musea, 2006). Konstantin Yudin and Veniamin Rozov recruited as permanent members of the live line-up.

December 2009 - in one three-hour session the In Concert CD was recorded.

How The Elements Awakened 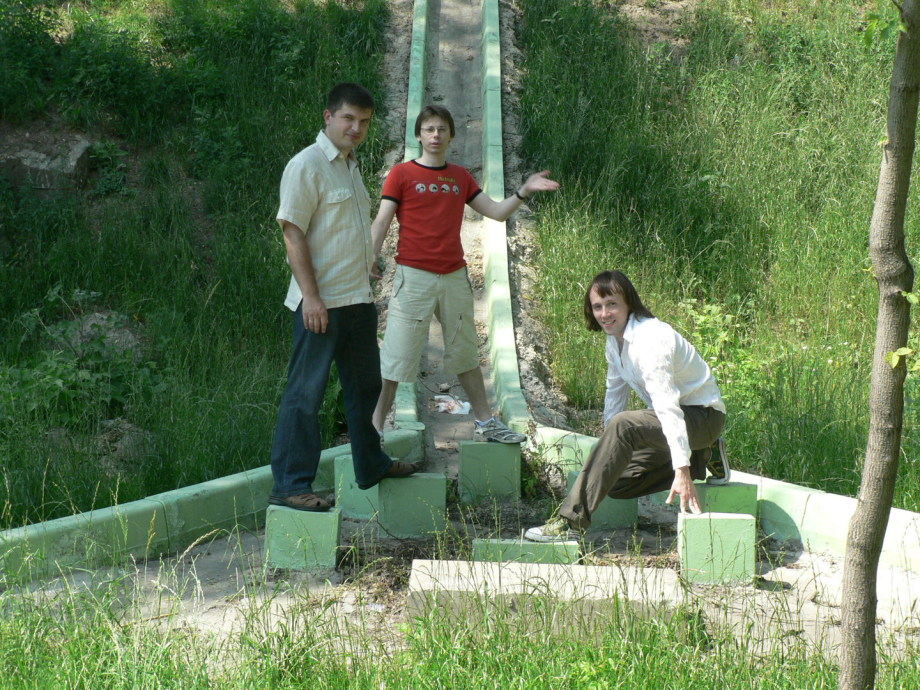 1. We were asked not to sing on our new album. By all kinds of people. They would walk up to us and literally beg: please sing nothing on your new album. Naturally, we’d ask, “would you like us to not sing something specific? Exactly which song would you like us to not sing on our new album?” “Any song, - people would implore, - please do not sing any song at all”. “Maybe you would also like us to not sing an instrumental composition?” “Yes, that’s it, - people would rejoice, - and instrumentals, too. Sing nothing at all!” “And what language would you like us not to sing in?” – we’d ask, just to make sure. In Russian, - people would shout in chorus, - first and foremost, don’t sing in Russian. Then, in English. And then, you may also not sing in all the other languages.” That wasn’t an easy task, to not sing anything in any language. One could even consider it impossible and give up. But we stood up to the challenge. Nothing is impossible for a true musician! Besides, we did actually keep singing throughout the recording. Only the microphone was off.

2. About Schostoccata. In search for some  arrangeable  material, Didorenko looked through the classical music heritage. Rockers have significantly abused many Russian composers, especially Bach and Vivaldi. Mussorgsky and Tchaikovsky were black and blue from constant arrangements. Fortunately, some of Schostakovich’s output still remained intact, due to his illegible manuscripts. Without wasting a second, we grabbed a piece of his 8th Quartet and adapted it into our environment. Truth be told, we ourselves couldn’t figure out all of it, because what we got wasn’t the best copy of the score. So we had to put in some of our own chords.

3. Infinity Street is essentially a spherical composition for 4 acoustic, an electric, and a bass guitar, plus percussions. When necessary, it (the composition) can also be utilized as a double-sided symmetrical snowball.

4. Name picking was going full throttle, sweeping everything off its way. Over the Islands – our favorite guitar riff-rock – was originally dubbed The Rings of Saturn. Akimov didn’t like the title – the associative train brought him, mysteriously, to the Lord of the Rings. Thinking on, we arrived at “Bahamas”, unfortunately, only as a figure of speech. “Bahamas” is a great name’ – Akimov said. “Beautiful” – Soloviev agreed, - “but what do we know about Bahamas? Is there rock-n-roll there?” “We must go, - Didorenko said, with determination, - and find out.” “Hawaii, Majorca, and Fiji would also be nice, - Soloviev added, meticulously counting his salary.” “Let’s pick a more general name, like “Flying over the Islands” – Didorenko suggested.” “Better just Flying Over”, - Akimov suggested. “Better just Over the Islands,” – Soloviev suggested. At which point we decided to stop.

5. About Simoom. Originally we planned a fast-driven thing depicting a typhoon. As an experiment, we decided to play it live at the concert and subsequently, the composition changed it’s name and took a dignified third place on the new album. Special thanks to Yuliya Basis for the piano part. They are both beautiful.

6. Couple of words about Paranoia Blues. No, wait… I think there’s someone hiding behind this curtain…

7. The Three States were composed as a concerto for 2 violins. There was also an idea to write 2 States for 3 violins and 1 State for 5. In case anyone is interested what kind of states were meant, we have a few explanations. The simplest one: those are dynamic, static and kinetic. But feel free to conduct your own research and disagree.

8. Collision of the Elements is a 5/8 composition with alternating time signatures occurring in unexpected places. Kinda  complicated.


9. Scenery with a Guitar and Sky Wide Open are pretty, decorative pieces in a relaxing-meditative mood. Music, like any other woman, can sometimes afford to stop making sense and start just being beautiful.

10. We’ve got several thanks that we’d like to deposit to the account of our percussionist Veniamin Rozov, because, firstly he played with us, and secondly, he regularly threw fresh wood into the fire of our ideas.

11. Awakening of the Elements – a fragment of the process.

Soloviev and his flute came to visit Didorenko, who was deeply and securely submerged in the recording of a new composition. Upon seeing his friend, Didorenko happily pressed a microphone against his throat and said: ”Play this: E-D-D-E”. Soloviev, unabashed, took out the flute, a piece of staffed paper, a pencil, settled comfortably on the sofa and got ready to write.
D. (indignantly) There’s nothing to write! Just play E-D-D-E.
S. Wait-wait-wait, what do you mean E-D-D-E? I can’t just up and play E-D-D-E.
D. You can, too. Otherwise why did you graduate the conservatory?
S. And post-graduated as well.
D. Anyway, you should play here, first E-D-D-E, then G-F-F-G, then higher and more notes. Each time, higher and more notes, get it?
S. What notes?
D. Just notes, any notes.
S. You sure?
D. Absolutely.
S. Here you go, then!
Didorenko, rubbing hands, leaps to the computer and hits “record”. Soloviev plays a few notes and stops, pensive.
D. Great!
S. I doubt it.
D. Sounds cool!
S. Rubbish.
D. What the doctor ordered!
S. Totally sucks.
Pause.
S. Well, is it on?
D. What for? We’ve already done it.
S. (in disbelief) Really? No, c’mon, wait, I’ll play one more time.
D. No-no-no.
S. You drunk?
D. I’m telling you, it’s all fine.
S. (yells) Let me play again, you idiot, flute is out of tune, notes all wrong!
D. (doubtfully) Sounds OK as it is to me. All right, an extra take, just in case.
Recording on. Soloviev plays. Stops.
S. (satisfied) Now we’re talking!
D. (unconvinced) Yeah?
S. (confident) Of course!
D. I dunno, I think it was better the other time.
S. That other time, I played total rubbish. Now, at least it makes sense.
D. None whatsoever. Do it again.
S. I don’t know what’s not to like… OK.
Recording on. Soloviev is not playing.
D. Well?
S. So what do I play?
D. (exasperated) No idea. It’s all done already.
S. Yeah, I think so. Second take is awesome.
D. First take is perfect.
Akimov. (comes back from the kitchen, chewing) That’s it, then! We’ll take take one part one, and take two part two. And we’ll start mixing.
S. Thank God. Just make the flute really quiet, so it can’t be heard. It really sucks.
D. Flute’s great! But do make sure one can hear the guitar and bass. And the violin. And the keyboard, too.
A. Don’t worry guys! (Turns on drums, top volume). So how’s balance?
S. Super. A little less flute, though.
A. What flute? There isn’t any flute.
S. Aha. I guess all’s cool then.
A. Let’s even out those drums first. (Puts on headphones, becomes immersed in sound of bass drum).
D & S sit in silence for a while, then exchange meaningful glances, get up, and tiptoe to the kitchen to boil water for dumplings.